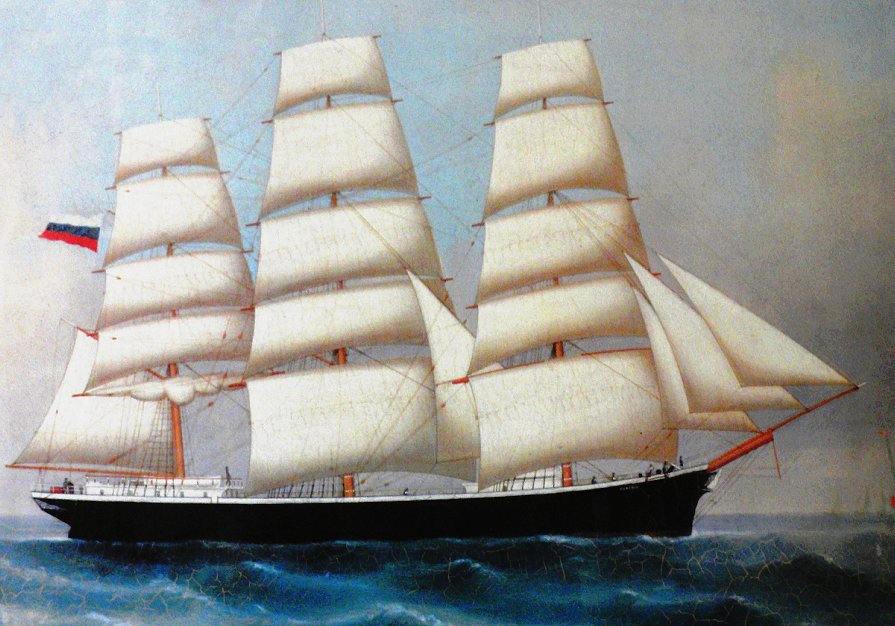 An artist’s impression of the Vanadis from the Jacobstad Museum in Finland. The picture is in the Heritage Centre framed by Ian Miller. 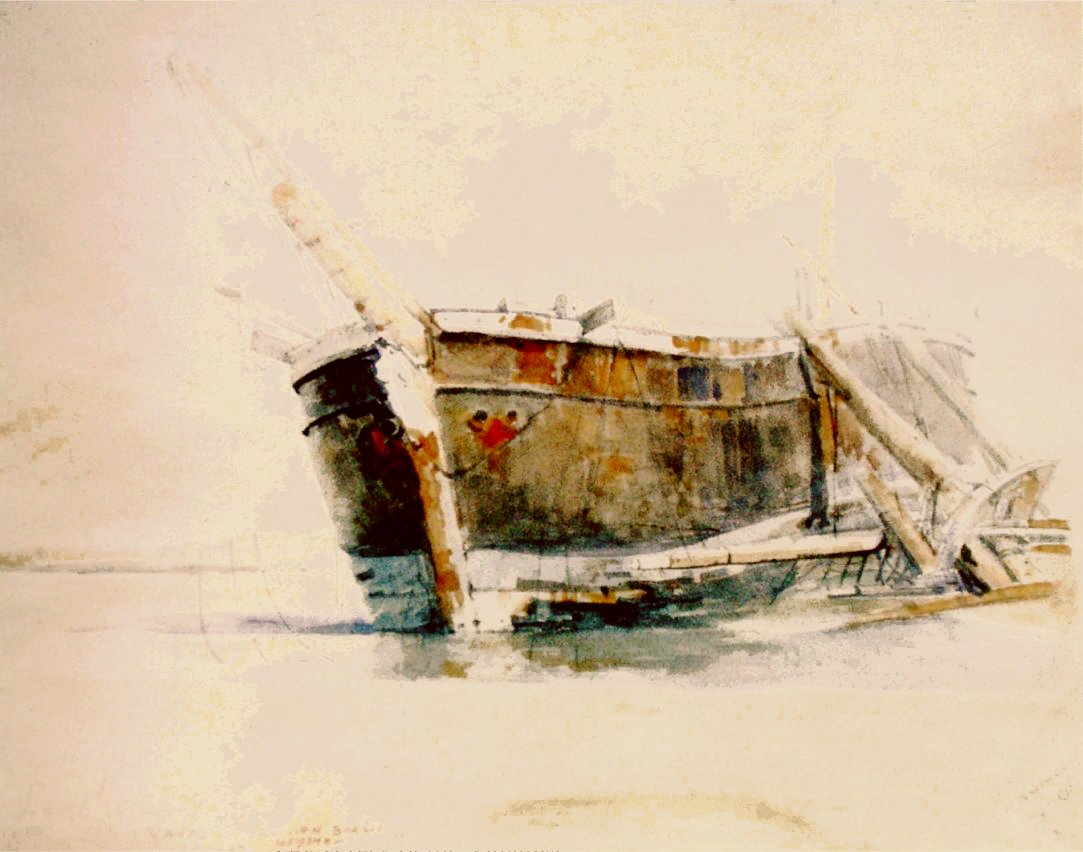 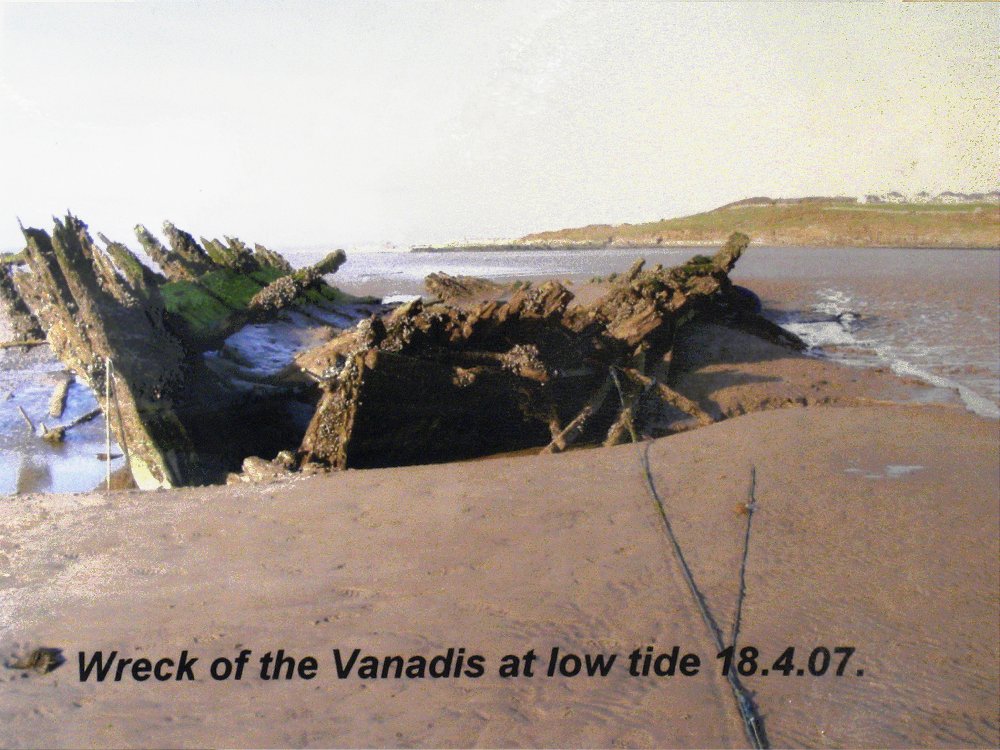 There have been several ships named Vanadis, the Norse name of the Scandinavian Freyja, goddess of love and beauty. A large steam frigate was built for the Swedish Navy in Stockholm and launched in 1862. It was armed with 22 cannons and flew the Swedish flag in many parts of the world.

‘Our’ Vanadis was a rather smaller cargo frigate built in Jacobstad, Finland and launched in 1876. It also had one cannon primarily as a precaution against possible piracy. For many years it was owned by the Finnish shipping magnate Otto Malm. The present day  Jacobstad Museum is housed in Malm House. In 1903 on a voyage from the USA to Fleetwood UK the Vanadis fell foul of another storm on arriving off Fleetwood at the entrance to Morecambe Bay and ended up as a wreck in Half Moon Bay, Heysham.

In the 20th century the United States navy also had a ship named Vanadis.

The Museum informs us that in the beginning the ship was rigged as a frigate (with three masts and square-sails on all three masts). After a hurricane in 1898 the rigging was totally damaged and it got a new rigging as a barque (with three masts with square-sails only on two masts and spanker sails on the aftmost mast). On the painting (picture top left) Vanadis is rigged as a frigate. The classification "frigate" was used on civil cargo ships in Finland/Russia. For more details about the Vanadis from the Museum  click here.

In the early years after the wreck, in Accolade to an Artist, Pam Corder-Birch records that the well known Lancashire and Heysham artist   William Woodhouse and his son Roy used to walk out and visit the site and make watercolour sketches of the Vanadis at various stages of her break up. One of these is in Lancaster City Museum as pictured left.

Ken Calverley of Heysham and Ian Miller with the help of Charlie Overett, have salvaged many items from the wreck; notably Ken has restored the ship’s cannon which is now exhibited (below left) in the Heritage Centre along with other items from the wreck. He gave an extensive and fascinating account of his experiences to the Morecambe Visitor newspaper in November 2007 and with their permission the article may be downloaded  here in pdf format.

In the summer of 2013 Heysham Heritage Association were offered the ship’s bell from the Vanadis which had been found on the sands at Knott End across the River Wyre from Fleetwood by a Mr Burgess who had carefully restored it. His son Martin recently inherited it from his father and decided it needed ‘a good home’ and contacted us via this website. The bell is now on display in the Heritage Centre with the other exhibits from the Vanadis.

The wreck of the Vanadis in recent years photographed by Ian Miller and also in the Heritage Centre. 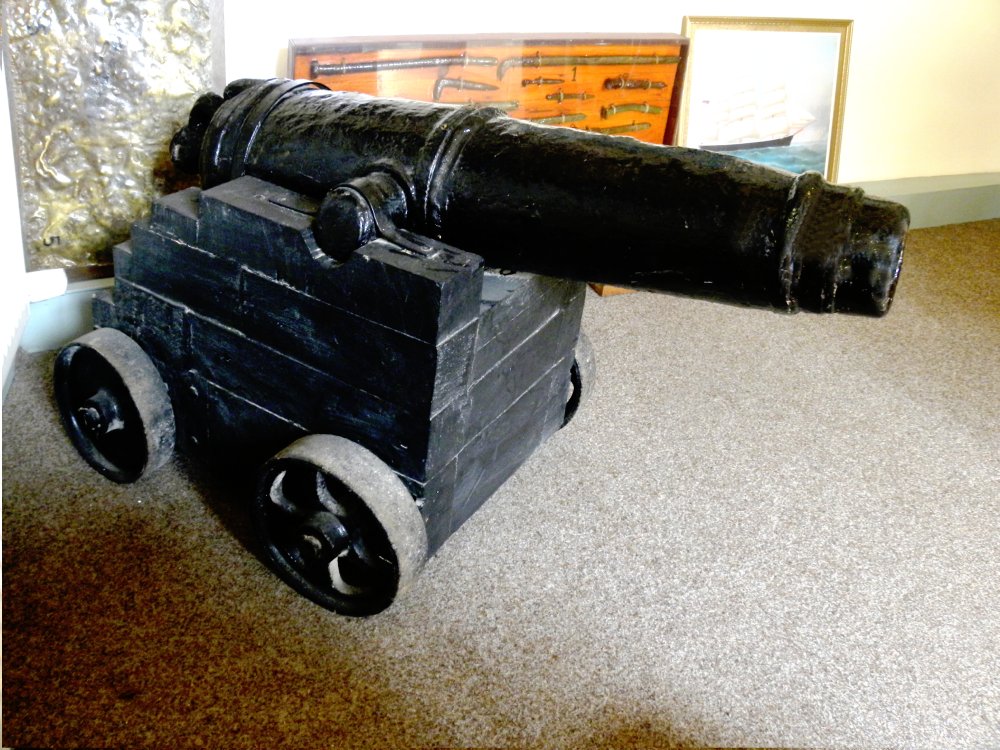 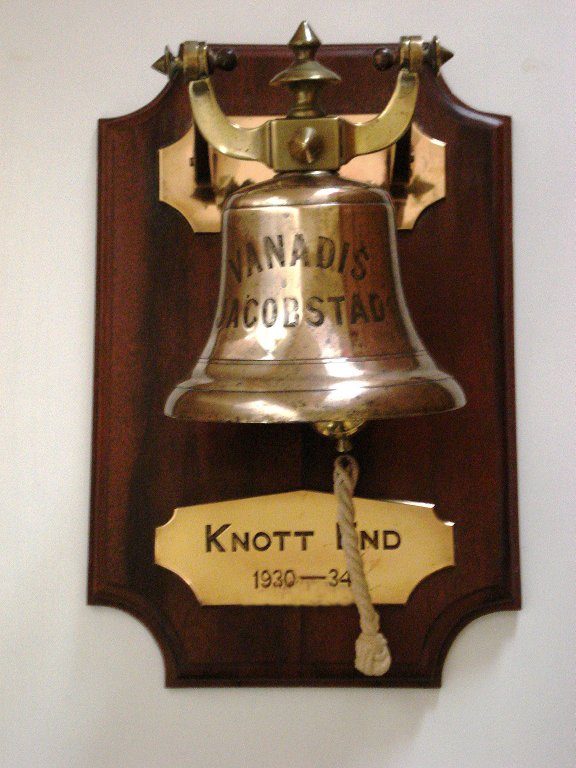 The final voyage of the SV Vanadis

The barque Vanadis left Darien, Sapelo Island, Georgia, USA on 13th January 1903 with a crew of 15 hands, bound for Fleetwood, with a cargo of pitch pine logs.

On the rough journey from the USA, the Vanadis was posted as overdue to Lloyds Register. It was finally spotted off Rathlin Island, Northern Island and eventually reached Fleetwood at about 5pm on 22nd February. Pilot Iddon of Fleetwood boarded the vessel at Morecambe lightship and anchored her at Lune Deep near Wyre Point, with the sails furled.

In the gale force winds the windlass broke on the starboard side. The strain on the anchors caused the chains to be pulled out of hold, resulting in the two anchors and the cable being lost. They had a spare anchor but no cable.
Pilot Iddon advised the Master Karl Oskar Karlsson to head for the sandbanks at Heysham, as this was the safest part of Morecambe Bay ; it was thought that any other place would result in the loss of lives, cargo or boat. The boat arrived very quickly, high tide being at 8.07, to a position NNE of Heysham Pier at a location of 54.3N 2.54W. According to Pilot Iddon, the vessel had a quiet night with very little rolling. At 3 o’clock one of the Vanadis lifeboats was launched containing 5 crew and Pilot Iddon, and it reached the shore only 100 yards away without any difficulty. They walked to Higher Heysham post office arriving at about 4am. The captain and 9 crew remained on board the Vanadis as at that time there was no danger. They would have been able to walk off at low tide as the boat was lying level, however the gale increased in velocity with the rising tide and with the dawn, distress signals were raised.

The lifeboat station at Fleetwood fired the gun at 7.30am, the harbour authorities having received a telegram saying Pilot Iddon and 5 crew were safe. The crew of the lifeboat donned their oilskins and cork jackets, and launched the lifeboat Maude Pickup at 8am.
It was a very rough sea and Coxswain Leadbetter set sails and made for the Vanadis which was 12 miles away. The Vanadis was reached in under an hour and the 10 crew were taken on board the lifeboat.